"An Evening with Ivor Novello" 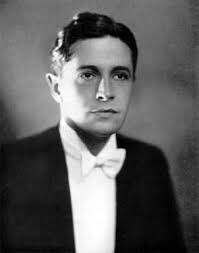 A unique opportunity to don your evening wear, enjoy an excellent dinner, and hear a live performance of some classics from the 'golden age' of music theatre.
These will include 'We'll gather lilacs', My dearest dear', and 'Waltz of my heart'. Enjoy listening to these and other gems from this largely forgotten era, in the splendour of the Club Dining Room.

Matthew Owens became Director of Music at Belfast Cathedral in September 2019. Prior to this he was Organist and Master of the Choristers at Wells Cathedral (2004-2019) and at St Mary’s Episcopal Cathedral in Edinburgh (1999-2004).

Matthew was educated at Chetham’s School of Music, Manchester; The Queen’s College, Oxford; the Royal Northern College of Music; and the Amsterdam Conservatorium.

He has guest conducted, among others, the London Mozart Players, English Symphony Orchestra, Southern Sinfonia, Scottish Ensemble, Nash Ensemble, Brook Street Band, and the Hungarian National Philharmonic Orchestra. He has directed choral workshops and summer schools throughout the UK and abroad – including Australia, China, Germany, Hong Kong, Luxembourg, New Zealand, and the USA.

As a conductor he has made over 30 CDs with major labels and as an organist, Matthew has given recitals in Australia, France, Ireland, New Zealand, Spain, Switzerland, the USA, and throughout the UK.

As a composer himself, Matthew is published by Oxford University Press, Novello, and the Royal School of Church Music.

Ali Darragh has performed with many of the leading early music ensembles in works such as Handel’s Messiah, Dixit Dominus, and Bach’s B Minor Mass. She made her solo CD debut with the Dunedin Consort in a recording of Bach’s St Matthew Passion released by Linn Records.

She performs regularly as a soloist with choral societies across the UK, with recent performances including Mozart’s Mass in C minor and Requiem; Haydn’s Nelson Mass; Handel’s Messiah and Acis and Galatea; Bach’s St John and St Matthew Passions, B Minor Mass and Magnificat; and Purcell’s Dido and Aeneas.

She is also in demand for film music, with recent performances and recordings including the solo theme tune for the mini-series ‘Moby Dick’, specialist vocal consort work for the Netflix Original ‘The Outlaw King’ and for an exciting new project ‘The Beauty of Science’ for the European Space Agency.