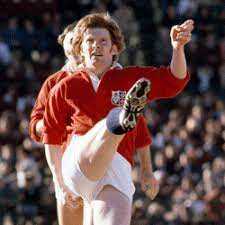 6-course dinner, wine with meal, auction and ballot with our Past President, Jim Neilly as MC

An outstanding schoolboy player with Belvedere College in Dublin, he was a member of Leinster Schools' Cup-winning sides of 1971 and 1972. He played club rugby for Old Belvedere and provincial rugby for Leinster, winning his first Irish cap, aged 21, against Australia in Dublin on January 17th 1976 but had to wait for more than three years for his second appearance.

Deemed to have been a controversial selection ahead of Tony Ward for the first test against Australia on Ireland's summer tour in 1979, Campbell produced a masterclass, scoring 19 points to set a new Irish record. He remained Ireland's first choice out-half until his retirement in 1984 and played a major role in 1982 when Ireland won the Triple Crown for the first time since 1949, setting a new Five Nations scoring record with 46 points.

He was at the helm the following year, 1983, when Ireland retained the Five Nations title, scoring 52 points including 21 against England, a record for an Irish player in the fixture. He was selected to tour with the British Lions to New Zealand and played in three of four tests, adding to the three test appearances he made in South Africa in 1980.

Old Belvedere's sports ground on Anglesea Road in Dublin was renamed Ollie Campbell Park in his honour in 2019.