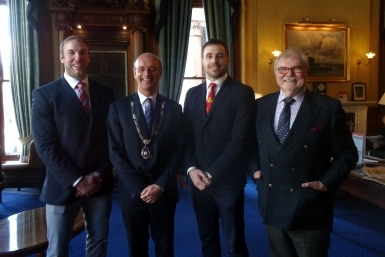 Members and guests sit down for luncheon at 1.00pm

followed at approximately 2.10pm by our guests, in conversation with our Past President, Jim Neilly.

We are delighted to welcome back two of Ulster and Ireland’s greatest players of the professional era who were members of Ireland’s 2009 team that won Ireland’s first Grand Slam for sixty-one years.Tommy Bowe, an outstanding Gaelic footballer and track athlete, learned his rugby at the Royal School Armagh and represented Ireland at Under 21 level before winning his first full Ulster cap, aged just 20, at the end of the 2003-04 season. He made a try-scoring Ireland debut against the USA in November 2004 and went on to win 69 Irish caps, scoring 30 international tries and toured with the 2009 and 2013 British and Irish Lions, playing in five tests. A surprise omission from the 2007 Irish World Cup squad, he played for Welsh side Ospreys from 2008 to 2012 before returning to Ulster to complete a career that brought 232 Pro14 and European appearances, and his 67 tries is still a Pro 14 record. His most memorable try came in Cardiff where his second half solo effort sent Ireland on their way to a first Grand Slam since 1948. A multi-award winner, including the RBS Player of the 2010 Six Nations Championship award. The regular presenter of Eir Sport’s Pro14 coverage since September 2018, he was the station’s main presenter for the 2019 World Cup in Japan.

Stephen Ferris, a product of Friends’ School Lisburn, also made his senior Ulster debut as a 20- years old, having been outstanding for the Ireland Under 20 World Cup side in the summer of 2005. His performances for Dungannon brought an Ulster Development contract and his rapid progress based on phenomenal strength and speed saw him win his first senior Irish cap against the Pacific Islands in November 2006 and he was selected for the 2007 World Cup squad. His total of 35 international appearances could have been doubled but for a number of injuries, one of which brought about an all too early retirement from the game. Outstanding for the Irish Grand Slam winning side in 2009, he was considered a certainty to be a test starter for the British and Irish Lions in South Africa that year, but atraining ground injury ended his tour after two spectacular provincial displays. He made intermittent appearance for Ireland over the next three seasons but was at his best at the 2011 World Cup and was hugely influential in Ulster’s journey to the 2012 Heineken Cup Final. An ankle injury kept him out of action for 15 months and an attempted return in March 2014 heralded the end of his career. Stephen has established himself as a discerning and entertaining television analyst.